This Inform Series addresses themes related to new religions, many of which have been the topics of Inform seminars. The series editorial board consists of internationally renowned scholars in the field. Books in the series will attract both an academic and interested general readership, particularly in the areas of Religious Studies, and the Sociology of Religion and Theology.

The series began with Ashgate in 2013 and continued with Routledge when the two companies merged in 2018. This series has produced sixteen books so far with a final volume currently in production. 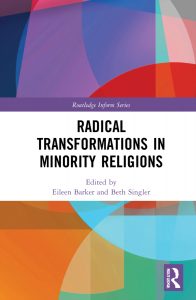 All religions undergo continuous change, but minority religions tend to be less anchored in their ways than mainstream, traditional religions. This volume examines radical transformations undergone by a variety of minority religions, including the Children of God/ Family International; Gnosticism; Jediism; various manifestations of Paganism; LGBT Muslim groups; the Plymouth Brethren; Santa Muerte; and Satanism.

As with other books in the Routledge/Inform series, the contributors approach the subject from a wide range of perspectives: professional scholars include legal experts and sociologists specialising in new religious movements, but there are also chapters from those who have experienced a personal involvement. The volume is divided into four thematic parts that focus on different impetuses for radical change: interactions with society, technology and institutions, efforts at legitimation, and new revelations.

This book will be a useful source of information for social scientists, historians, theologians and other scholars with an interest in social change, minority religions and ‘cults’. It will also be of interest to a wider readership including lawyers, journalists, theologians and members of the general public. 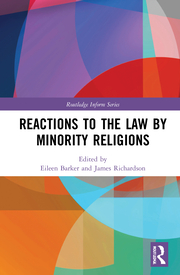 An international panel of experts offer examples from North America, Europe and Asia demonstrating how religions with relatively little status may resort to violence or passive acceptance of the law; how they may change their beliefs or practices in order to be in compliance with the law; or how they may resort to the law itself in order to change their legal standing, sometimes by forging alliances with those with more power or authority to achieve their goals. The volume concludes by applying theoretical insights from sociological studies of law, religion and social movements to the variety of responses.

There is a response to Chapter Five in this volume by Nicholas Chiaia here. 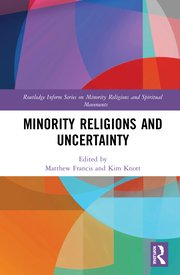 Religions are at their core about creating certainty. But what happens when groups lose control of their destiny? Whether it leads to violence, or to nonviolent innovations, as found in minority religions following the death of their founders or leaders, uncertainty and insecurity can lead to great change in the mission and even teachings of religious groups. This book brings together an international range of contributors to explore the uncertainty faced by new and minority religious movements as well as non-religious fringe groups.

The groups considered in the book span a range of religious traditions (Christianity, Buddhism, Hinduism, Islam), old and new spiritual formations such as esotericism, New Age and organized new religious movements, as well as non-religious movements including the straight edge movement and the British Union of Fascists. The chapters deal with a variety of contexts, from the UK and US, to Japan and Egypt, with others discussing global movements. While all the authors deal with twentieth- and twenty-first-century movements and issues, several focus explicitly on historical cases or change over time.

This wide-ranging, yet cohesive volume will be of great interest to scholars of minority religious movements and non-religious fringe groups working across religious studies, sociology and social psychology. 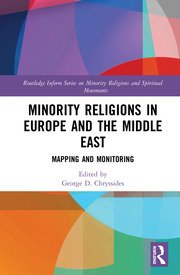 Minority religions, not only New Religious Movements, are explored in this innovative book including the predicament of ancient religions such as Zoroastrianism, ‘old new’ religions such as Baha’i, and traditional religions that are minorities elsewhere. The book is divided into two parts: the gathering of data on religious minorities (“mapping”), and the ways in which governments and interest groups respond to them (“monitoring”). The international group examine which new religions exist in particular countries, what their uptake is, and how allegiance can be ascertained. They explore a range of issues faced by minority religions, encompassing official state recognition and registration, unequal treatment in comparison with a dominant religion, how changes in government can affect how they fare, the extent to which members are free to practise their faith, how they sometimes seek to influence politics, and how they can be affected by harassment and persecution.

Bringing together debates concerning the social and political issues facing new religions in Europe and the Middle East, this collection extends its focus to Middle Eastern minority faiths, enabling exposition of spiritual movements such as the Gülen Movement, Paganism in Israel, and the Zoroastrians in Tehran.